This crispy Braised Salsa Verde Chicken is loaded with a ton of flavor in every bite! It’s smothered with salsa verde and topped with fresh herbs. Serve with simple spring salad for complete a delicious meal! 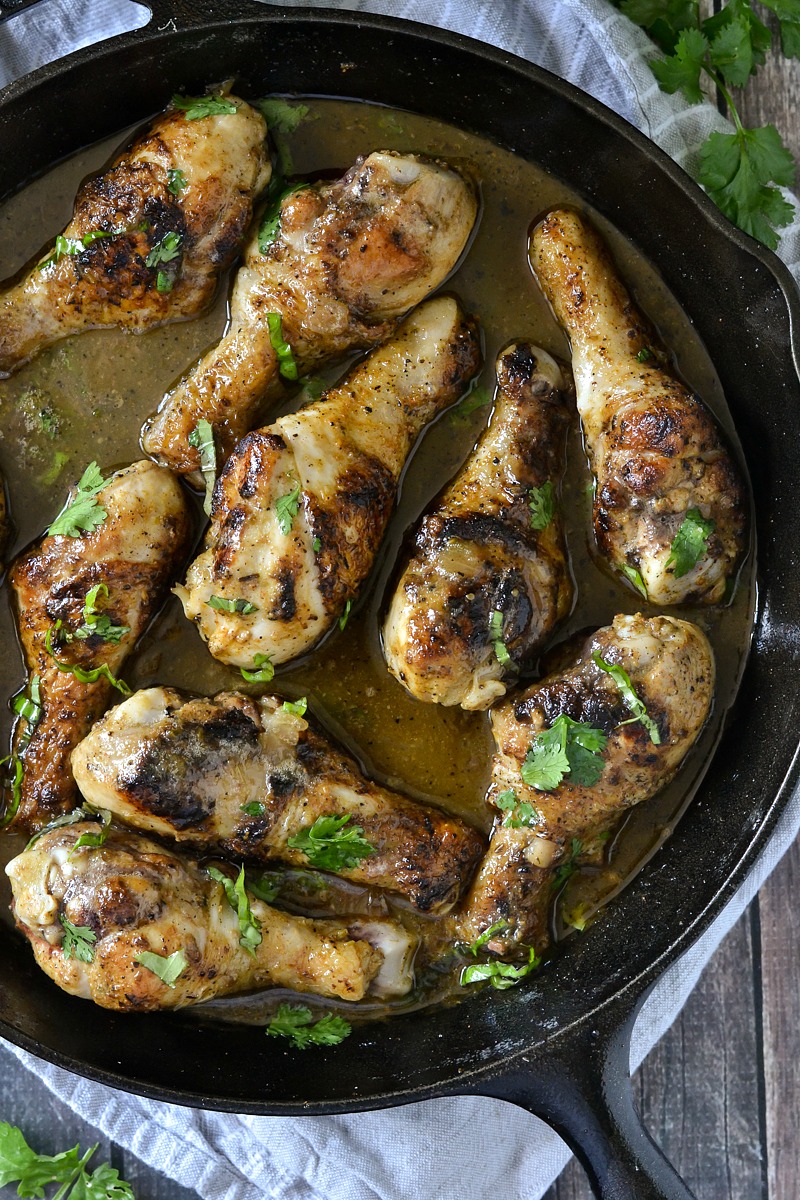 Bored with the same old, same old chicken dinner? Then you’ll want to add this delicious Braised Salsa Verde Chicken to your dinner menu! It’s loaded with a ton of flavor in every bite! It’s a super simple meal that easy to prepare and to toss together any night of the week.

I love recipe testing with my friends. A few weeks ago I had one of my dearest friends over for lunch. Her and I have known each other since we were 14, so almost 27 years! That’s crazy! When we were young back in the late 80’s, early 90’s we thought we were super cool (what teenage doesn’t) and we were totally obsessed with New Kids on the Block (who wasn’t back then). Anyways her and I created our own little band called Sugar and Spice and we thought we were going to become totally famous and tour with New Kids on the Block.

We had fun. I still vaguely remember us practicing songs in my bedroom and taping them (yes we used cassette tapes back then) to record our songs that surely were destined to hit the top of the music charts. 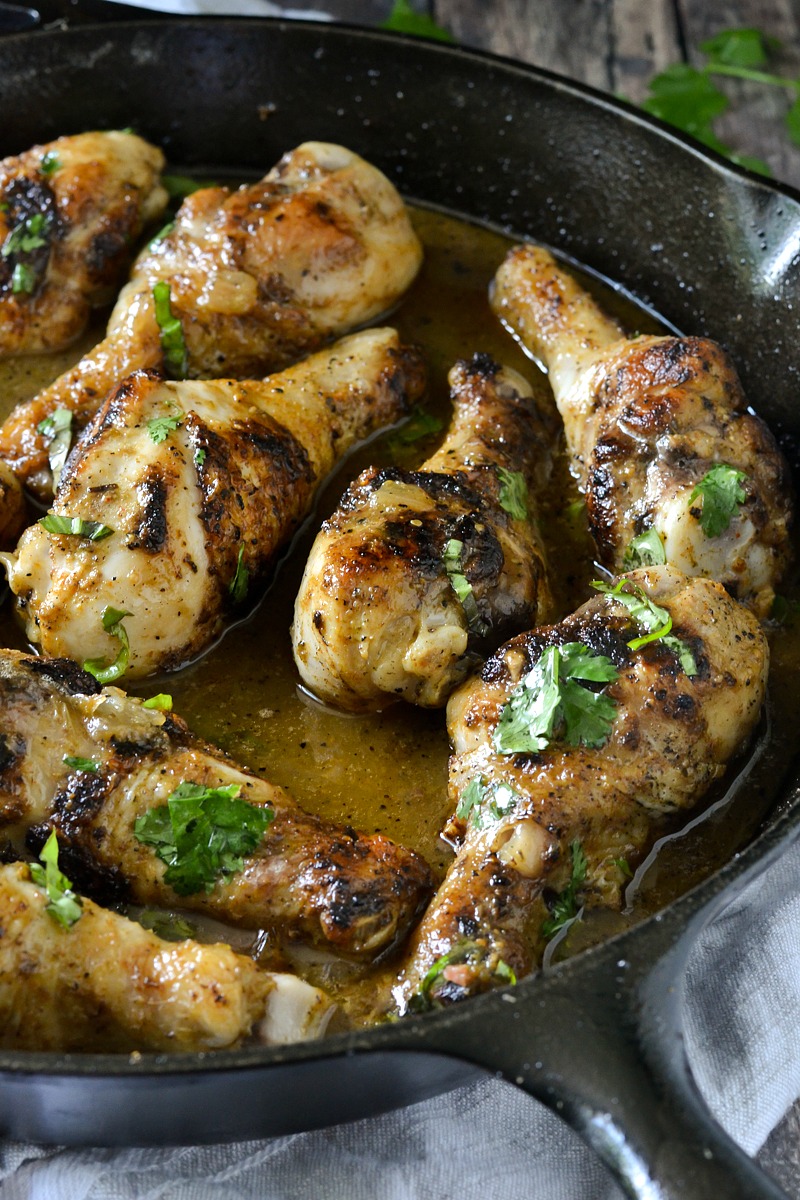 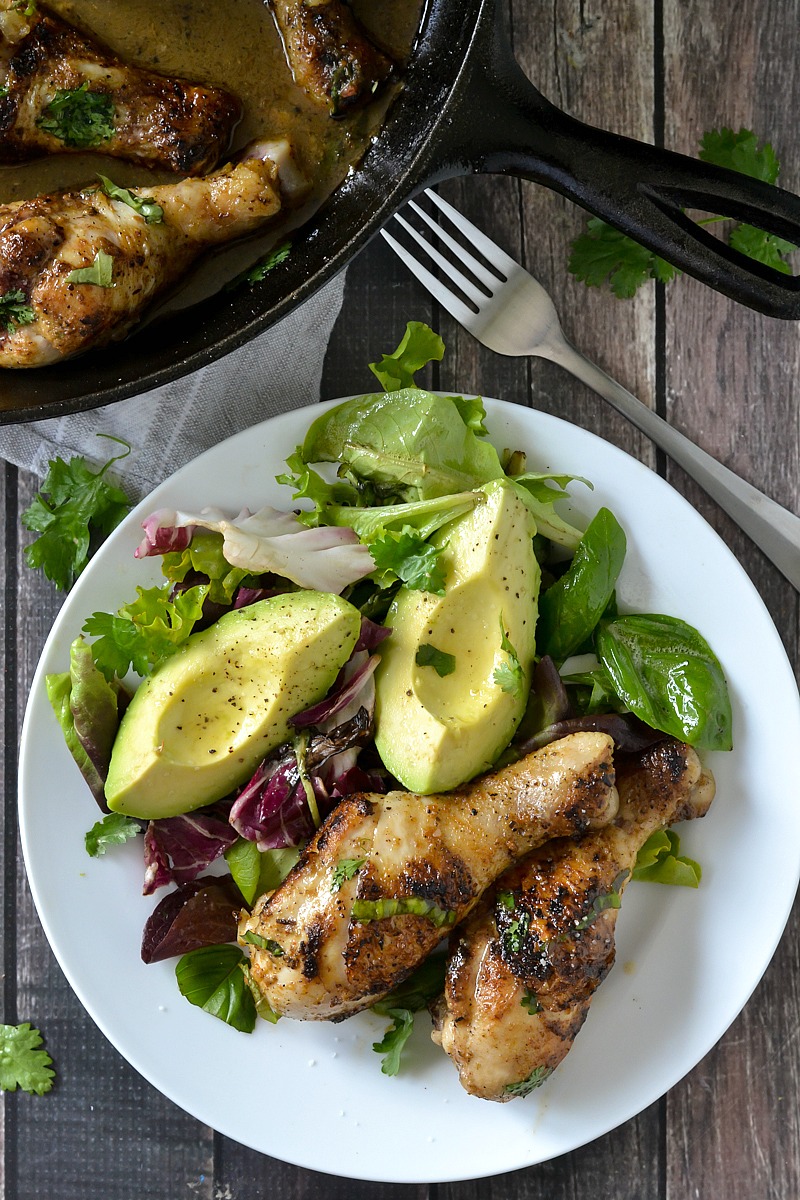 The funny thing is we never toured with our beloved New Kids on the Block but we went to many of their concerts and wait for this it wasn’t until a few years ago that we finally met them! YES, for any of you NKOTB fans about 3 years ago her and I were going to relive our youth and go to their show in Buffalo. One of the brands I work with asked me if I wanted to go backstage and meet them. Well that was a no-brainer! Of course we did!  I couldn’t believe it! We were like giddy mom’s acting like we were 14 year old girls again! What a way to ring in our 40’s then meeting our teenage heartthrobs! It was so cool.

Anyways I had her over for a little mommy lunch before the end of the school year a few weeks ago so we could catch up. Instead of making one of my go-to recipes (she LOVES my Bang Bang Shrimp) I thought I’d try out this Braised Salsa Verde Chicken. I was thrilled with the results! It’s so good and full of flavor! I served it with a simple spring salad with avocados tossed with my White Balsamic Vinaigrette and some coconut rice. I don’t eat white rice but she does and so does my husband so I made it for them. I do however make a coconut cauliflower rice which is simply shredded cauliflower made into “rice”. I usually skip the whole shredding process and get frozen Trader Joe’s Riced Cauliflower which I love to have on hand to whip up an easy side dish. Trader Joe’s sells both fresh and frozen riced cauliflower. I tend to purchase the frozen because I Trader Joe’s is about a 40 minute hike from where I live so I like to stock up on some stuff like riced cauliflower since I don’t get to TJ’s often plus I always have it on hand. 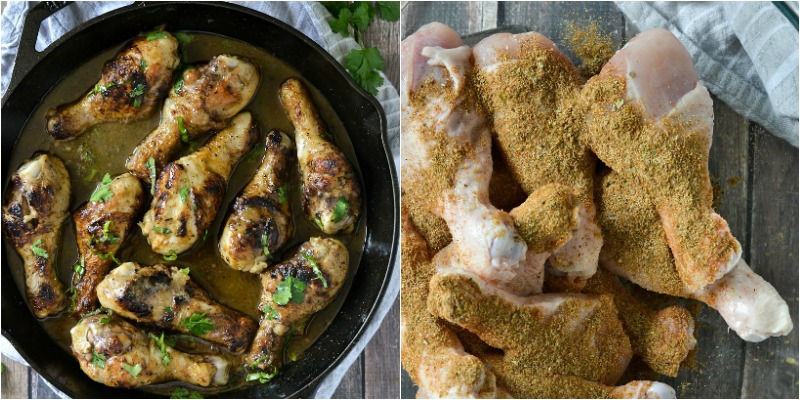 So how do I make my coconut riced cauliflower? While I don’t have an exact recipe since I usually just toss it together I can tell you roughly how I make it. I heat up some coconut oil in a skillet, about a tablespoon or so depending how much riced cauliflower I’m making. Once the oil is melted I toss in my TJ’s frozen riced cauliflower and sauté it over medium high heat until heated through. Once it’s cooked I pour in some full fat canned coconut milk. I usually use Thrive Market Coconut Milk or Trader Joe’s. How much I use really depends on how much “rice” I’m cooking and how creamy I want it. A little goes a long way so I usually add a tablespoon at a time and let it cook for a few minutes adding more if needed until it’s to the desired taste and consistency. Of course you want to season it with a little S&P to taste and you could even stir in some freshly chopped cilantro and/or a little squeeze of fresh lime juice.

For my friends that would prefer just sticking with some good old-fashioned white rice it’s super easy to make coconut rice with plain rice as well. Simply substitute the water for the same amount of canned full fat coconut milk and cook as usual. If you want your rice a little creamier and a smidge more coconut milk. 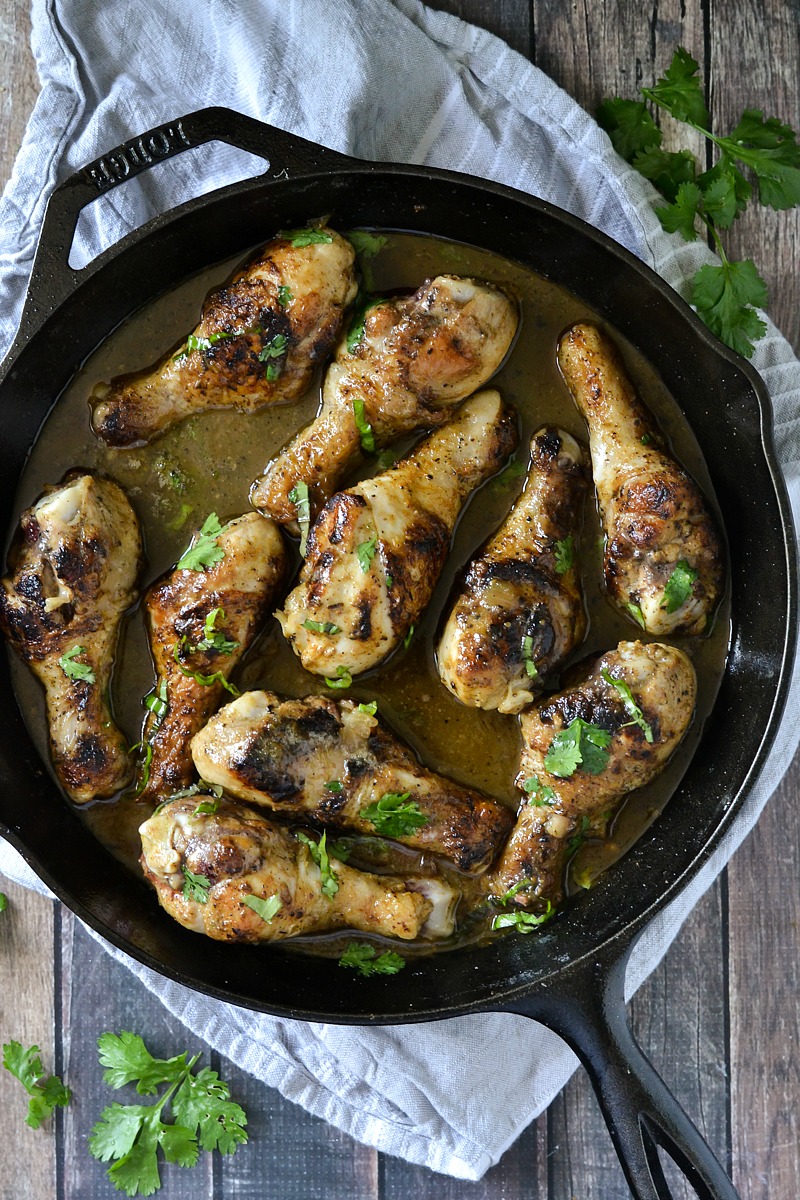 MORE ABOUT THIS RECIPE

You can place all the chicken in a large bowl or a resealable bag will work just fine too. Next you want to whip up your spice mix, sprinkle it over the chicken and give it a good toss. Use your hands if you’re not grossed out to really give it a good coating. You can let the chicken hang out with the spice rub for a little bit to let that rub absorb in. 30 minutes is all it needs but if you’re short on time you can get right to the next step which I’ve done. If you’re really preparing ahead of time then refrigerate it with the spice rub for a few hours or even overnight to let that spice rub sink in.

Heat the oil in a nice big cast iron skillet, braiser or any good deep skillet. Once that skillet is hot add your chicken working in batches so the chicken has room to crisp up. In my cast iron skillet I do 5 drumsticks at a time. Cook about 5-7 minutes or so per side until its nice and brown. The longer it cooks per side the crispier the skin! Once you’re done with the first batch set it aside on a plate and cook the rest of the chicken.

Once the chicken is nice and browned it’s time to deglaze the skillet. I use a little chicken broth about 1/3 cup but you can use anywhere from 1/4-1/2 cup depending on how saucy you want it. You want to turn up the heat to high to deglaze the pan. Once deglazed pour in a jar of salsa verde. Cook it on high for just a minute or so until it’s heated through then reduce the heat to medium-low. I use Drew’s Organic which I totally recommend. Another good one is Frontera. There are plenty of them on the market so pick your favorite.

Now add back in the chicken and turn to coat with the yummy sauce. Cover and simmer on medium-low until the chicken is cooked thoroughly. The cook time will really depend on how long you cooked the chicken beforehand and how meaty it is. Also the longer it simmers the better even if the chicken is cooked so the sauce really mixes in. I usually go about 20-30 minutes longer but again it will vary. 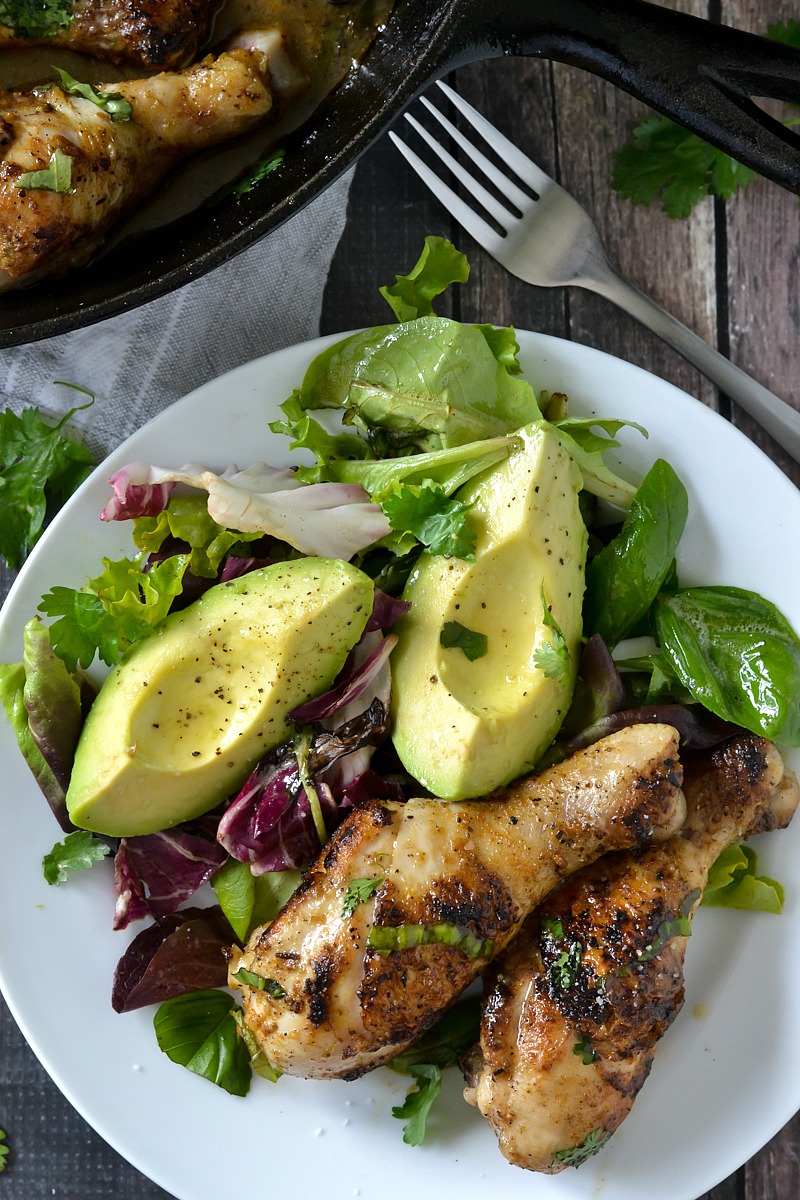 I use Drew’s Organic salsa verde 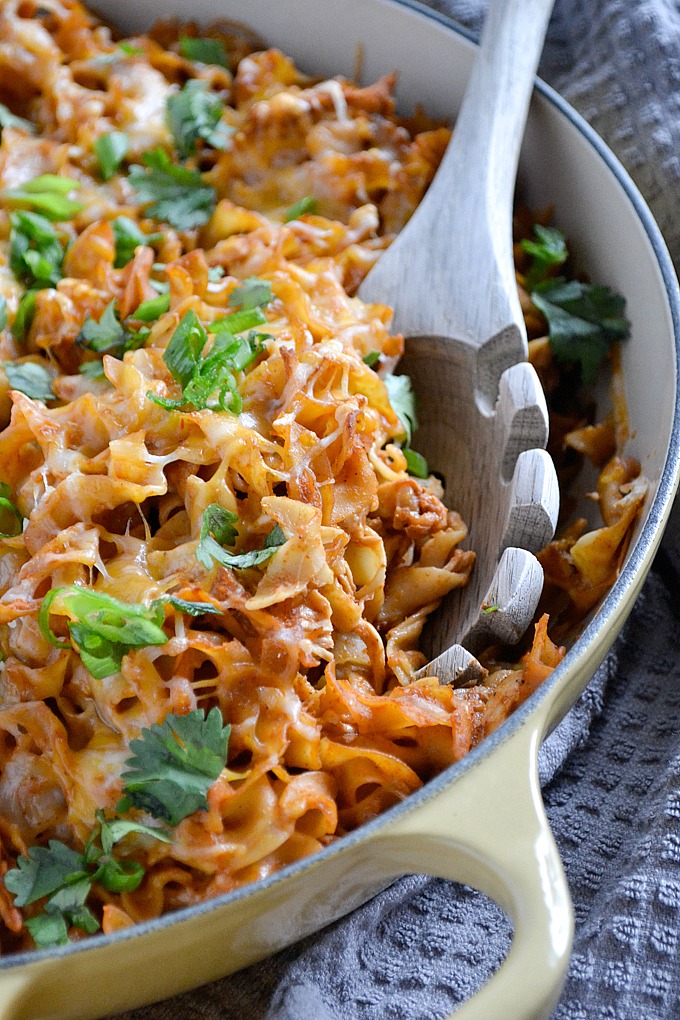 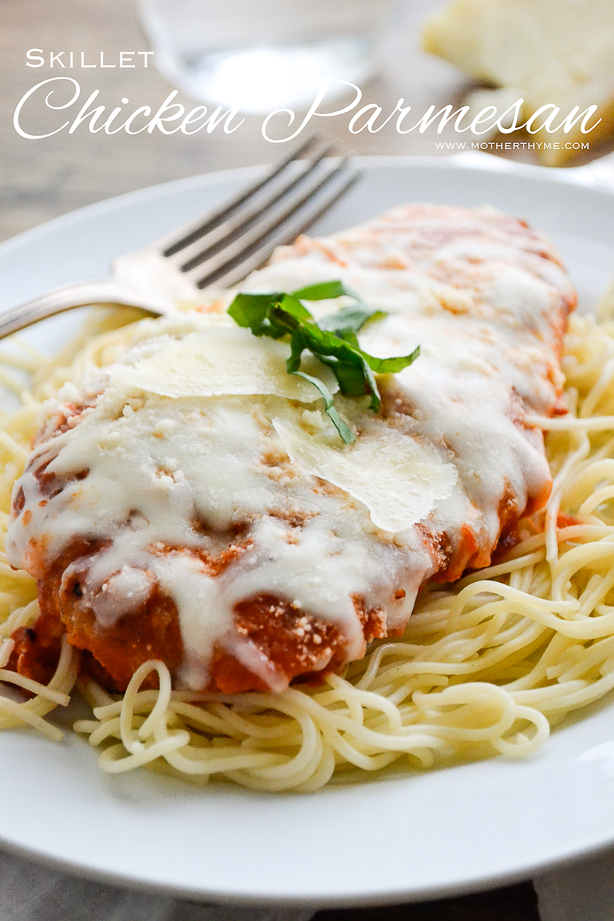 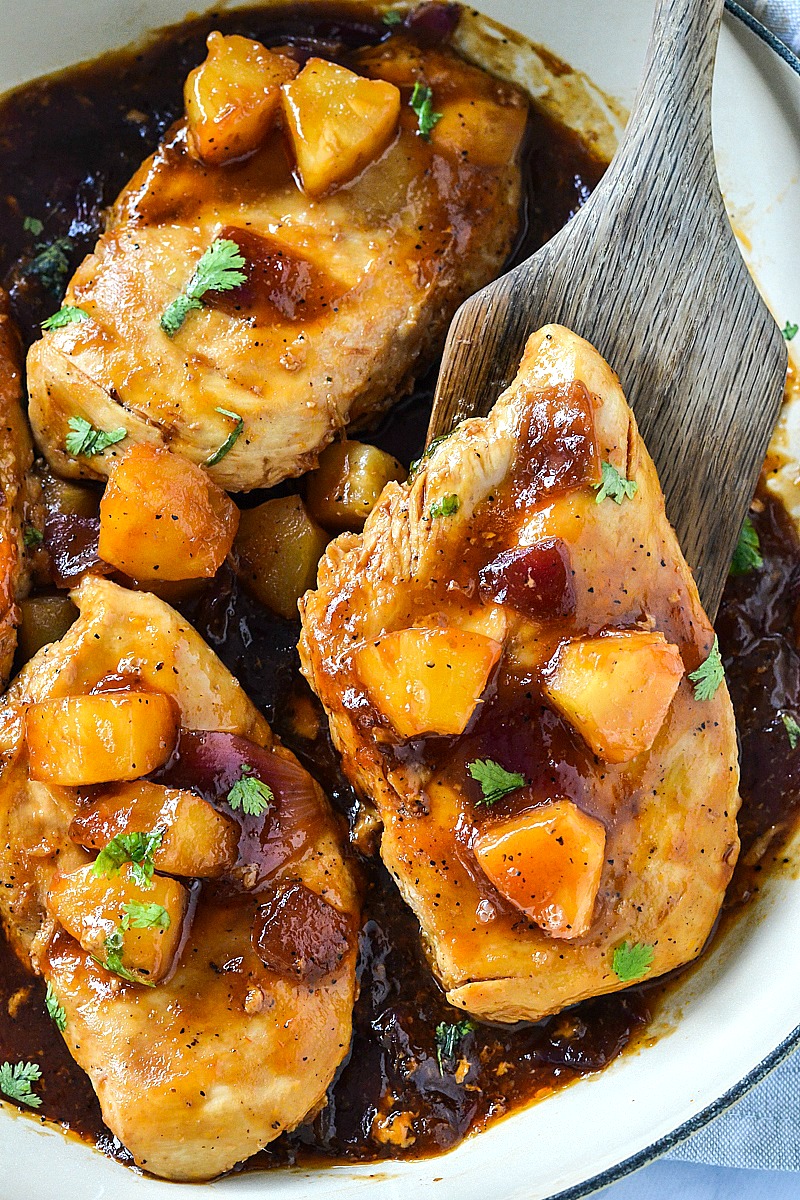 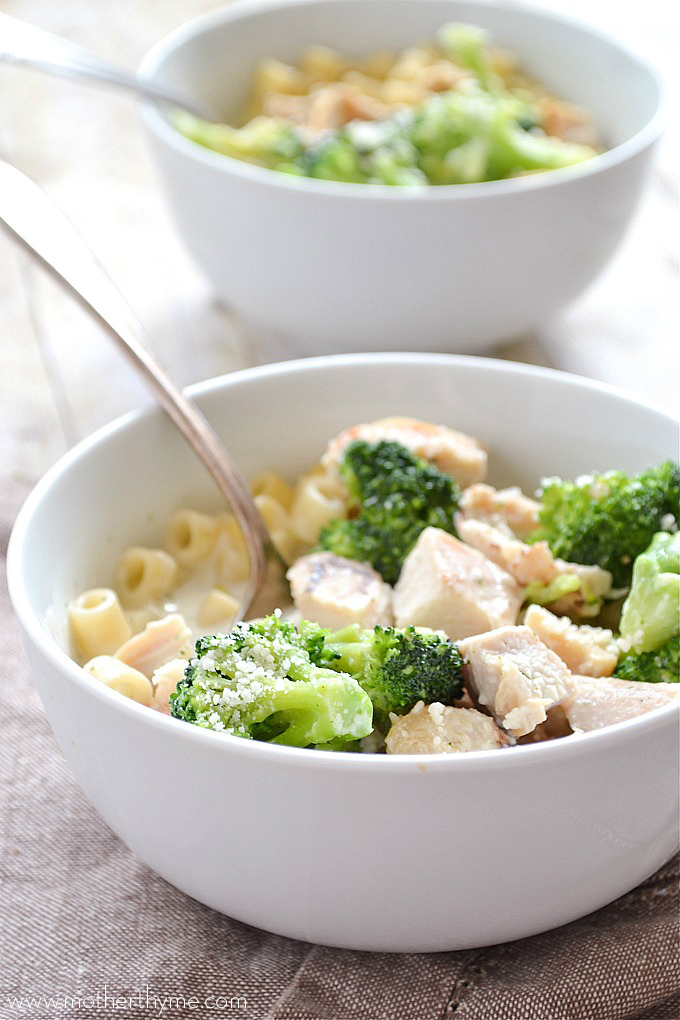 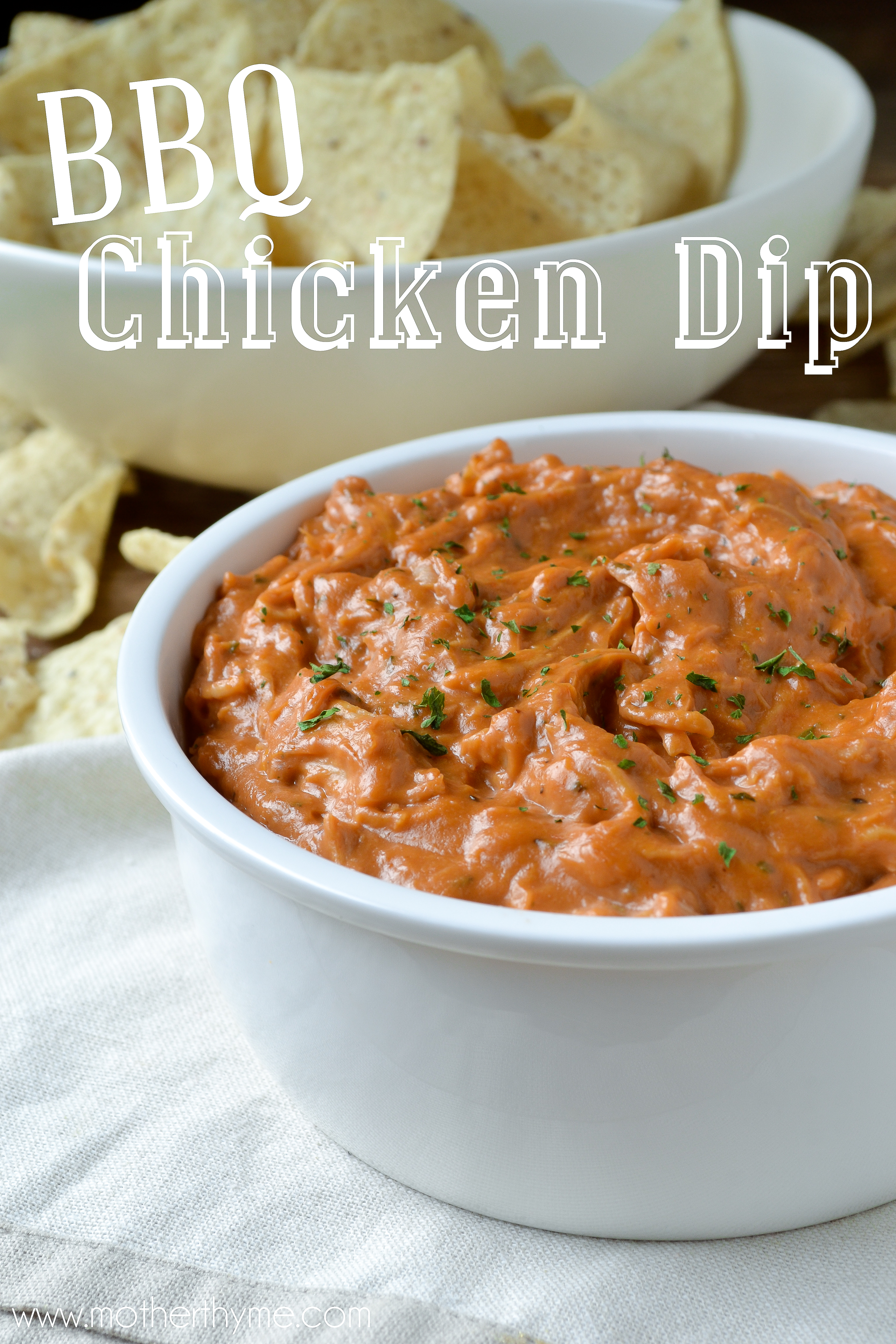